“We will tell the next generation the praiseworthy deeds of the Lord, His power and the wonders He has done…to teach their children… and they in turn would tell their children”—Psalm 78:4-6

Prayer Campaign for EDUCATION in Belize 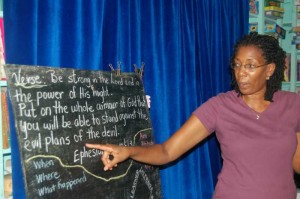 Purpose of Education—To pass on the learning of past generations and produce students who can assess their developing SHAPEs (Spiritual gifts & callings, Heart passion, Abilities, Personality & Experience), contribute to team-building, and keep learning and solving problems as they arise in the seven mountains of influence on local, national & international levels.

Current conditions: A large percentage of the national budget is allotted for education. Belize has many Christian and church-based schools. Churches have constitutional rights to manage schools and provide religious instruction whether or not they receive government aid. Yet Christian schools feel much government pressure to become more secular. Yet the national curriculum provides an outline of all subjects that does makes room for Christian content. Also, there is a prevalence throughout the education system of overcrowded, undisciplined classrooms with under-trained teachers, increasingly secular curriculum and lack of parental cooperation, resulting in low grades, high drop-out rates, and student involvement in sex, drugs and violence.

Parents and conditions outside school

GOD ALSO SHOWED US TO

June 13, 2014. Jamaica’s Supreme Court issued an injunction reversing University of West Indies’ dismissal of long-time Professor Brendan Bain from his position as Director of the Caribbean HIV/AIDS Training Network. Bain has spent decades researching AIDS and treating patients with AIDS. He had testified in Belize’s Supreme Court sodomy case that men who had sex with men were much more vulnerable to AIDS infection. For telling this proven truth UWI—under pressure from LGBT proponents—fired Bain. Protests in support of Bain around the Caribbean, including two in Belize on May 17 and 25, were well-covered by the media.

October 15, 2013. In response to concerns raised by church leaders on Oct. 8, the standing committee on the Belize rape bill held a public hearing on Oct. 15. Some items in the bill targeted sex crimes against children. But other items were worded in such a way as to actually open the door for adult predators and LGBT propaganda in schools. The government promised to change the wording in order to address church concerns. Many in the audience objected that we weren’t hearing the bill in its final form. Others pleaded for the inclusion of items not covered by the bill, such as measures against rampant pornography and against promotion of abortion—which is still illegal in Belize—and contraceptives to minors without parental consent. Audience opposition to anything about the new gender policy in the bill was so intense that the government has hardly promoted that policy at all since (as of June 2014).

January 15, 2013. A 13-year-old Belize City schoolgirl who had run away from home with a 30+year-old boyfriend returned of her own accord and responded positively to counseling from her Christian principal.

July 20, 2012. A government committee agreed to extend the deadline for public response to its plan for decriminalization of marijuana, beyond the original four days, so that there can be a much fuller public discussion on this complex and critical issue. That will facilitate public awareness that marijuana smoking can impair learning, memory and driving ability, and cause cancer, and harm children of users. The teacher’s union later raised concerns that marijuana decriminalization would result in higher levels of drug use, disease, crime & behavioral problems.