“Of the increase of His government and peace there will be no end”—Isaiah 9:7

Prayer Campaign for the GOVERNMENT of Belize

Purpose of Government in the democratic nation of Belize:

Current conditions: Since independence from the UK in 1981, Belize has had a parliamentary democracy with general elections hotly contended by the two major parties. The party which wins the most seats in the House of Representatives selects a prime minister and holds the balance of power until the next election. Third parties have the potential of altering that balance of power. The judicial branch consists of magistrate’s courts and the Supreme Court with the final court of appeal being the Caribbean Court of Justice. Belize presently has more ties with former British Caribbean colonies than with Central American nations. The main foreign policy issue is the border with Guatemala. Guatemala still officially claims Belize’s territory as its own, but is beginning to offer more cooperation in stopping the illegal border intrusions and the threat of drug cartel activity.

THE STATE OF THE CHURCH & THE NATION 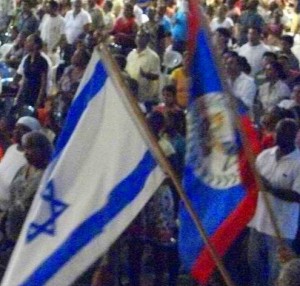 May 16, 2014. Belize won a key battle to maintain its 2011 takeover of the formerly foreign-owned and lucrative Belize Telemedia Limited. In a 2 to 1 decision, the Court of Appeals ruled the government’s right to acquire BTL, and also the foreign-owned Belize Electricity Limited. The ruling may leave Belize liable to pay compensation for the period between its first BTL takeover in August 2009, which the court had found unconstitutional, and its July 2011 takeover, which was affirmed by a constitutional amendment. The case now goes for final appeal to the Caribbean Court of Justice. We must pray that God will not allow impoverished Belize’s finances to be bled away by rich foreigners.

March 7, 2014. Mayor Darrell Bradley, a committed Christian, reported that the Belize City Council had met its target of concretizing 100 streets in just a year and a half using a $20 million municipal bond. This unprecedented project came just in time. It seemed to prophetically anticipate the just-ended, extremely torrential rainy season. Were it not for the solid new concrete surfaces, the rains would have made major roads practically impassable. The money for the project is being well-accounted for by the new policy of public monthly financial reports on the City Council’s website. Now they have another $10 million pledged by the central government to surface at least 40 more city streets, expected to be finished by September.

January 24, 2014. Belize’s negotiations to restructure its US $547.5 million Super bond debt received the 2013 Sovereign Restructuring Deal of the Year. It was awarded by the publication Latin Finance, which covers both Latin America and the Caribbean. It is a deal we longed prayed for. Christine Vellos, leader of the Buttonwood Bay prayer group, participated on the 5-person Belize negotiating team. She was chosen because of her work as Deputy Governor of Belize Central Bank. More than 86% of the bondholders accepted the new terms. The deal included a 41% reduction in the current interest rate and a 20% reduction in the subsequent step-up interest rate, plus a 6-year grace period before principal repayments commence.

November 22, 2013. The Belize Police Department released new statistics showing a decrease in major crimes from January through October 2013 as compared to the same period in 2012. According to Amandala, “There were 119 murders recorded at the end of October 2012, while for that same period this year, there were 88 murders. The frequency of another major crime – robbery –has also decreased, from 413 incidences last year to 236 for the same period this year. One of the only crimes that is on the increase is theft; so far this year there have been 845 cases of theft, while there were 777 such cases up to the end of October last year.”

October 15, 2013. In response to concerns raised by church leaders on Oct. 8, the standing committee on the Belize rape bill held a public hearing on Oct. 15. Some items in the bill targeted sex crimes against children. But other items were worded in such a way as to actually open the door for adult predators. The government promised to change the wording in order to address church concerns. Many in the audience objected that we weren’t hearing the bill in its final form. Others pleaded for the inclusion of items not covered by the bill, such as measures against rampant pornography and against promotion of abortion—which is still illegal in Belize—and contraceptives to minors without parental consent. Audience opposition to anything about the new gender policy in the bill was so intense that the government has hardly promoted that policy at all since (as of June 2014).

August 17, 2013. Mario Ramirez Trevino, a top leader of Mexico’s Gulf Cartel, was arrested by military forces just one month after the capture of Zetas drug lord Miguel Trevino Morales. This shows that Mexico is again serious about going after drug lords one year after newly-elected President Pena Nieto moved to dissolve the AFI, Mexico’s main agency for fighting drug trafficking.

August 13, 2013. Dozens of leaders from both the Evangelical Association and the Belize Council of Churches met to share their proposed changes to the government’s pro-LGBT gender policy. They overcame recent differences in response and agreed on all the changes. All leaders present signed a statement in support of the one combined document articulating the church’s full response to the policy.

July 15, 2013. Mexican Marines captured Zetas drug lord Miguel Trevino Morales in Anahuac, Nuevo Leon, with US $2 million, eight weapons and hundreds of rounds of ammunition in his possession. He was wanted on charges of organized crime involvement, torture, drug trafficking, the illegal use of firearms and money laundering. Under his 5-year rule, the drug cartel began expanding into Guatemala, committed atrocities there, and left Z for Zetas marks on trees in Belize’s Chiquibul Forest.

July 2-20, 2013. Nearly 10,000 people participated in Constitution Marches in all the six districts of Belize. These marches highlighted the provisions in the Constitution concerning the family, the “supremacy of God,” and disease prevention. Belize Action organized this nationwide response to the government’s new pro-LGBT gender policy.

February 12-13, 2013. We have been praying for months for a new deal for the $1 billion Superbond debt, which is larger than Belize’s entire 2012 budget of $953 million, and on which Belize is behind in payments. God gave us a Christmas present when a new deal with a representative of Belize’s creditors was struck just before the New Year. It was approved by both the House and Senate on Feb. 12-13. The new deal includes a 41% reduction in the current interest rate and a 20% reduction in the subsequent step-up interest rate, plus a 6-year grace period before principal repayments commence.

December 5, 2012. Nation of Islam leader Louis Farrakhanwas scheduled on Dec. 6-9 to meet with Belizean heads of state and civil society, to conduct media interviews, and to stage youth and men’s rallies in Belize. However, he is known for making many racial slurs against Jewish people and white people, and has admitted that he contributed to the hostile mood in the 1965 assassination of Malcolm X, who had just publicly renounced his prejudice against whites. Considering the strains we already experience in this multi-racial nation, we prayed that God would not allow this visit to happen. The day before his planned arrival Farrakhan was hospitalized for dehydration and had to cancel his visit.

November 25, 2012. We prayed with urgency that the Holy Spirit would come and bring to repentance the killer of three family members in their home in Ladyville in the wee hours of this Sunday morning, and not escape the law as 90% of murderers in Belize have done. And in fact he did confess to police soon afterward. We pray that God will use the many ministries at Hattieville prison to bring Jesus into his life.

Oct. 5, 2012. Restoration of yearly auditing is holding GOB officials accountable for expenditures, a very healthy development after many years of government activity off the books.

Sept. 4, 2012. Gian Ghandi, legal counsel for the Ministry of Finance, reassured the churches that any financial agreement Belize signs would have “spouse” understood to mean husband or wife in a heterosexual marriage, because that’s what it means according to Belize law. This issue arose when Belize Action found a clause in the Domestic Banks and Financial Institutions Bill that appeared to expand the meaning of “spouse” to include same-sex couples.

July 20, 2012. A government committee agreed to extend the deadline for public response to its plan for decriminalization of marijuana, beyond the original four days, so that there can be a much fuller public discussion on this complex and critical issue. That will facilitate public awareness that marijuana smoking can impair learning, memory and driving ability, and cause cancer, and harm children of users. The teacher’s union later raised concerns that marijuana decriminalization would result in higher levels of drug use, disease, crime & behavioral problems. 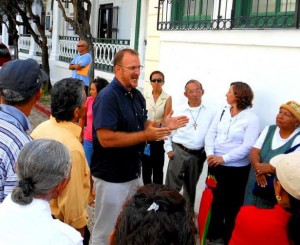 April 27, 2012. After 3 months of consideration, Justice Michelle Arana made preliminary decisions in the sodomy lawsuit. She approved the churches’ expert witnesses, with one exception, and denied UNIBAM’s expert witnesses. She also affirmed that the Preamble to the Constitution is part of the Constitution, against the odd claim that it is not relevant. The Preamble does “affirm that the Nation of Belize shall be founded upon principles which acknowledge the supremacy of God…and the equal and inalienable rights with which all members of the human family are endowed by their Creator.” This is important, because we hold that the practice of sodomy cannot be a right since it is contrary to the Creator’s design.

March 7, 2012. The national elections were peaceful and free of violent incidents, as we had earnestly prayed. Also, leaders of both main political parties took stands against the lawsuit to legalize sodomy.

Sept. 4, 2011. Prime Minister Barrow negotiated a truce among Belize City gangs, followed by weeks of a significant drop in the murder rate.

Aug. 19, 2011. PM Barrow on told members of BAEC that he considers the church to be the most influential institution in Belize and wants to consult with BAEC on every major issue from now on. 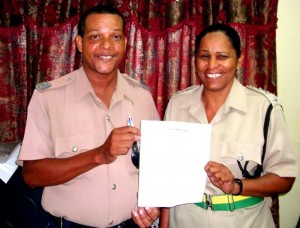 April 9-12, 2011. April 9: Intercessor Dawn Bowen received a warning from the Lord that gangs would target police, BDF and other authorities. April 10: Police Inspector Diane Hall came to a Belize City church with two other officers, requested prayer for help against crime, and said they planned to start prayer meetings at the police station, and to hold a citywide prayer rally on May 8. April 12: BC-HOP met at Remar and began to pray for these police prayer initiatives and for citywide protection from crime. Just as we started, Prayer Leader Enfield Gordon received a cellphone call from the office of the national Commissioner of Police. Enfield was asked to work as a positive spiritual influence in a police program for youth in Belize City, which in fact has the world’s highest crime rate. Thank God and pray for His continuing grace for our involvement with the police and these youth.