“These craftsmen have come to terrify them, to throw down the horns of the nations who lifted up their horns against the land of Judah to scatter its people” —Zech. 1:21 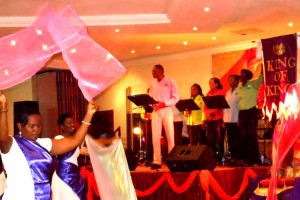 Purpose of Music & Arts—To use creative forms to glorify God, in ways that express divine worldviews, address relevant issues, challenge us to higher levels, and impact growing audiences for His kingdom purposes, with the effect of drawing them closer to Him.

Current Conditions: The variety of music played in Belize includes defiantly obscene and violent songs which are often loudly amplified in the hearing of children. Girls learn provocative dances at very young ages and take on the identity of sex objects. Church music ranges from hymns to contemporary praise and worship songs, but not many produced by Belizeans. Those Christians who do write music have been fusing popular music styles with Christian lyrics, and get some play time from Christian radio stations and PLUS-TV. In worship many are moving from a performance mode to a God-encounter mode, and are getting ready to release new expressions in music that will glorify God and save souls in public venues. Christian drama and worship dance groups are small but growing. Occasional dance and theater pieces are staged in schools or the Bliss Institute. Belizean arts and crafts are mainly geared toward tourists, but are finding increasing acceptance as building décor. Some music and art that is expressive of Garifuna and Maya cultures also draws on familiar spirits and is rooted in witchcraft. Belize needs more pioneers in expressing Christian worldviews in both visual & performing arts. Some of our current pioneers are under-appreciated and misunderstood.

In answer to prayer, God is leading many worship teams into deep encounters with Him, and releasing new expressions as they mix prayer and worship together. We expect this to produce new Belizean music that will accompany a major move of God across the nation.

April 28, 2012. After weeks of a wave of murders in Belize City, Christians from many churches filled to overflowing the nation’s biggest conference room, at Belize City’s Princess Hotel, with glorious worship and dance led by Call To Worship, encouraging us all to face the current crisis not with fear but with a bold faith that releases His peace wherever He leads.

Sept 16, 2011. In June, leaders of Call to Worship were really concerned about the lack of participating musicians and finances. After more prayer, they were joined in a few weeks by dozens of musicians representing nine denominations, and more people expressing interest in supporting music in Belize. On 9/16/11 Call to Worship packed the Biltmore Plaza Hotel to overflowing with glorious praise, adoration and dancing in the Holy Spirit.