“How lovely on the mountains are the feet of him who brings good news” —Isaiah 52:7

Prayer Campaign for MEDIA in Belize 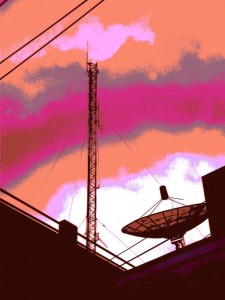 Purpose of Media—To publicize the truth, with compassion and love, about the mostimportant developments and possibilities being explored, on the seven mountains of influence, in ways that the greatest number of people can understand, pray about and act on to further God’s kingdom on earth.

Current Conditions: US programming has dominated TV since cable was introduced in the early 1980s. Many Belizeans identify cable TV as the main cause for Belize’s decline from a family-friendly society to one plagued by family breakdown, promiscuity and violence. Belize lacks local programming, except for news and talk shows which focus more on problems than solutions, and tend toward aggressive political partisanship except during timely disaster alerts . A variety of music broadcasts includes defiantly obscene and violent lyrics which are often loudly amplified in the hearing of children. Advertising that promotes gambling, liquor and promiscuity is widespread. But newspapers and increasingly radio stations are often open to Christian viewpoints. Christian media are growing, with several radio stations and PLUS-TV, but lack sufficient funding.

June 13, 2014. Jamaica’s Supreme Court issued an injunction reversing University of West Indies’ dismissal of long-time Professor Brendan Bain from his position as Director of the Caribbean HIV/AIDS Training Network. Bain has spent decades researching AIDS and treating patients with AIDS. He had testified in Belize’s Supreme Court sodomy case that men who had sex with men were much more vulnerable to AIDS infection. For telling this proven truth UWI—under pressure from LGBT proponents—fired Bain. Protests in support of Bain around the Caribbean, including two in Belize on May 17th and 25th, were well-covered by the media.

May 16, 2014. Belize won a key battle to maintain its 2011 takeover of the formerly foreign-owned and lucrative Belize Telemedia Limited. In a 2 to 1 decision, the Court of Appeals ruled the government’s right to acquire BTL, and also the foreign-owned Belize Electricity Limited. The ruling may leave Belize liable to pay compensation for the period between its first BTL takeover in August 2009, which the court had found unconstitutional, and its July 2011 takeover, which was affirmed by a constitutional amendment. The case now goes for final appeal to the Caribbean Court of Justice. Control over its own media makes Belize less subject to undue foreign influence.

October 15, 2013. In response to concerns raised by church leaders on Oct. 8, the standing committee on the Belize rape bill held a public hearing on Oct. 15. Some items in the bill targeted sex crimes against children. But other items were worded in such a way as to actually open the door for adult predators. The government promised to change the wording in order to address church concerns. Many in the audience objected that we weren’t hearing the bill in its final form. Others pleaded for the inclusion of items not covered by the bill, such as measures against rampant pornography and against promotion of abortion—which is still illegal in Belize—and contraceptives to minors without parental consent. Both the Oct. 8 and Oct. 15 events were well-covered by the media. Audience opposition to anything about the new gender policy in the bill was so intense that the government has hardly promoted that policy at all since (as of June 2014).

April 2, 2012. On Feb. 26 we prayed that God’s voice on national issues be heard on media and specifically that LOVE-FM, Belize’s most popular TV & radio station, would start broadcasting the true love of God. On April 2, LOVE-FM decided to feature church leaders discussing national issues twice a month on Belize Watch. They also decided to broadcast from a different church service every week, and to promote and broadcast the multi-church July 1 March For Jesus.

March 28, 2012. In the first public debate on the sodomy lawsuit on March 28, 2012, televised by PLUS-TV, Louis Wade’s arguments against the gay agenda met with repeated loud applause from the UB-Belmopan audience, and UNIBAM’s arguments fell flat. Louis later said he knew God was using him because he said things he had never even thought of before. Thank God the media has given overall good coverage to the churches’ response to the sodomy lawsuit.

August 26, 2011. Former Media prayer leader Esther Choe’s daughter Rebecca reported that the license was approved for their new Voice of God radio station, after a quick start-up process: “What took years now takes months. The Lord is working at an accelerated pace”!