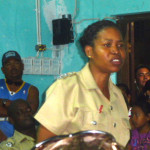 PRAYER ALERT: In response to the brutal police killing of Hilbert Sotz, 18, on June 8, Belize Police Department officials announced that an entirely new police force is being put in place in Caye Caulker. These officials met Thursday night with villagers who packed the community center to overflowing. Pastor Oscar Delgado of Shekinah Glory started things off with prayer that God Himself would make this new police force a real change for the better. Many villagers are skeptical after having a completely new police force take charge in 2009 following Lorleen Young’s murder. It produced only short-term results. Young’s murder was blamed on extreme police negligence at that time. Sotz’ murder is blamed on extreme police brutality now. Villagers were anxious to hear how real change will happen.

Dezerie Phillips, Officer Commanding the Eastern Division, acknowledged that the past new police force did not do its job. Officer Phillips called on spiritual leaders and the whole community to help this change of force really work this time. She and other officials at the meeting urged villagers to: 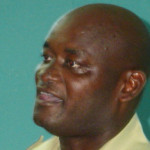 New Police Sergeant Norman Benguche asks that new police be given a chance to prove they will make a difference.

One villager complained that the police department kept sending corrupt officers to Caye Caulker. To general applause, Phillips replied, “The officers were not sent here corrupt. They got corrupt here.” She pointed out that too many villagers have been offering policemen bribes, drinks and drugs. As a solution, a rotation of officers is planned every six months. But Phillips expressed confidence that the new Inspector for Caye Caulker, Dehanne Augustine, would be here to stay for positive long-term change. And that Ms. Augustine would team up well with new Police Sergeant Norman Benguche.

Ms. Augustine spoke of how she had urged that a new Inspector be appointed who could build trust with the community. She was then told that she was the one. She was given one day’s notice. But Ms. Augustine jumped at the challenge. She related how she has a passion for families, children and community work. She has overseen successful neighborhood watches before, with essential help from the local people. She has faith that these watches can work here. But only with lots of community cooperation.

The murdered boy’s grieving father, Saturnino “Kekchi” Sotz, later stood to voice his support of Ms. Augustine. “It’s time to speak out when we have problems. Now we have someone who will listen. She explained to me how things can work better here. Please, let’s all work together with the new police.”