CHRISTIAN NEWS: SOURCE on Egyptian military. By DAVID D. KIRKPATRICK. NY Times. Published: December 7, 2011.CAIRO. Egyptian military rulers said Wednesday that they would control the process of writing a constitution and maintain authority over the interim government to check the power of Islamists who have taken a commanding lead in parliamentary elections. 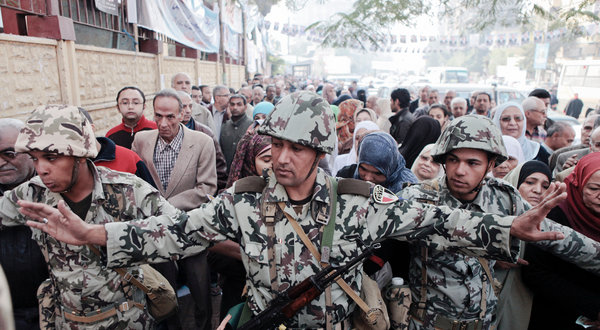 Moises Saman for The New York Times. In Cairo last month, soldiers guarded a polling place before it opened to voters. Islamists have taken a big lead so far, prompting military rulers to act.

In an unusual briefing evidently aimed at Washington, Gen. Mukhtar al-Mulla of the ruling council asserted that the initial results of elections for the People’s Assembly do not represent the full Egyptian public, in part because well-organized factions of Islamists were dominating the voting. The comments, to foreign reporters and not the Egyptian public, may have been intended to persuade Washington to back off its call for civilian rule.

“So whatever the majority in the People’s Assembly, they are very welcome, because they won’t have the ability to impose anything that the people don’t want,” General Mulla said, explaining that the makeup of Parliament will not matter because it will not have power over the constitution.

He appeared to say that the vote results could not be representative because the Egyptian public could not possibly support the Islamists, especially the faction of ultraconservative Salafis who have taken a quarter of the early voting.

“Do you think that the Egyptians elected someone to threaten his interest and economy and security and relations with international community?” General Mulla asked. “Of course not.”

The military’s insistence on controlling the constitutional process was the latest twist in a struggle between the generals’ council and a chorus of liberal and Islamist critics who want the elected officials to preside over the writing of a new constitution.

Just three weeks ago, Cairo erupted in a week of bloody protests set off in part by the military’s attempts to claim permanent powers to intervene in civilian politics and to enshrine in the constitution protection from public scrutiny. Under intense pressure, the Egyptian military appeared for a time to back down.

But the setting of the general’s remarks — an extraordinary question-and-answer session for an invited group of eight American journalists and one British journalist, without any Egyptian news organizations — indicated that he was also talking to Washington. The Obama administration joined the calls of Egyptian activists for the generals to turn over power “immediately” to a civilian government, and the generals have expected that the threat of an Islamist takeover at the polls might now give Washington pause.

It was unclear if the council planned to ever deliver such a message to the Egyptian public or political parties. Egyptian activists were as incensed that the council laid out its plans to foreigners first as they were by its reassertion of control.

“This is an attempt to stage a coup, and nobody wants it — even the people who are against the Islamists,” said Negad el-Borai, a human rights activist in Cairo.

He accused the military council of playing liberals and Islamists against one another in an effort to preserve its own power. “This is madness,” he said. “They are deciding to push the country toward a broad civil war.”

Saad el-Katanti, secretary general of the Brotherhood’s Freedom and Justice Party, told The Associated Press that his party also believed that the constituent assembly should be broadly representative of all segments of the population. “Why does the council want to interfere?” he said.

General Mulla, for his part, insisted that he respected the fairness and integrity of the election, which began in November and will continue in stages until January. But, he said, “In such unstable conditions, the Parliament is not representing all the Egyptians.”

He also appeared to escalate a mounting confrontation with the Muslim Brotherhood, the Islamist group that is Egypt’s best-organized political force, over control of the interim government.

The Brotherhood, whose political party emerged as the biggest winner in the early election returns, with about 40 percent of the vote, have demanded that the Parliament take over the right to name or dismiss a prime minister; General Mulla insisted that the prime minister would continue to report to the military council.

Although the Egyptian military in previous plans for the transition had called for Parliament to pick 100 members of a constituent assembly that would draft the constitution, General Mulla made clear that the military council no longer intended to allow that.

“The majority of the People’s Assembly will not be the only one represented in the constituent assembly,” he said, at times questioning the essential premise that an elected body could represent the general public. “We have a lot of other factions such as workers, farmers, engineers and doctors who are not in Parliament.”

“They should represent all the Egyptian people, and no one can really oppose this demand,” he said.

He acknowledged that the Egyptian military had a recent timetable for the transition that left only about a month for the drafting of a constitution between the seating of a Parliament and the beginning of a presidential race. But he appeared to believe that the old Egyptian Constitution — built for one-party rule, lacking clear separation of powers or judicial independence, clogged with traces of Nasserite socialism — might not need much fixing.

“A lot of legislators are saying that we have a very good Constitution and a very unique one except for only Chapter 5, about the presidential elections, so we will only amend this chapter,” he said.

Asked if the military would eventually submit to public parliamentary oversight of its budget, General Mulla appeared to find the idea ridiculous, saying he knew of no military whose budget was public.

Asked if the Egyptian military might intervene in civilian politics in the future, however, he was more circumspect. “The armed forces won’t intervene in the political life of Egypt since the people will consent in the parliamentary bodies,” he said. After the adoption of new government institutions, he said, “there will be no need to intervene.”

Obama calls for Egyptian military to turn over power