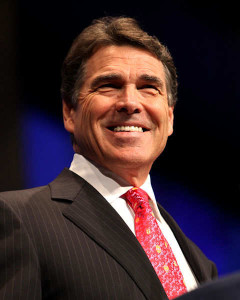 Rick Perry’s latest ad was intended for Iowa, but thanks to the national media, it’s airing on every network in America. A number of pundits are panning the spot for its bold social conservative themes, which they insist will hurt the Texas Governor’s chances. “I’m not ashamed to admit that I’m a Christian,” Gov Perry says, “but you don’t need to be in the pew every Sunday to know there’s something wrong in this country when gays can serve openly in the military but our kids can’t openly celebrate Christmas or pray in school.” The ad is called “Strong,” and that’s the kind of message it sends on issues like religious freedom. “As President, I’ll end Obama’s war on religion. And I’ll fight against liberal attacks on our religious heritage.” True, Gov Perry probably wouldn’t win the media’s vote with that kind of platform–but he does stand to benefit with everyday Americans who are tired of seeing their values in the line of fire under this administration.

Despite the heat his campaign is taking over the ad, Gov Perry stands by it. “I’m very comfortable with that ad,” Perry said. And he should be. In just the last several months, there’s been a powerful surge of anti-religious sentiment from this administration, and it’s already bled into our military, federal funding, and international affairs. Consider this inventory of decisions from the Obama administration, which date back to June of this year.

All of these decisions were made in the last six months. If this isn’t a steady drumbeat against religious liberty, I don’t know what it is. Good on Gov Perry for recognizing the urgency of fighting back before it’s too late.