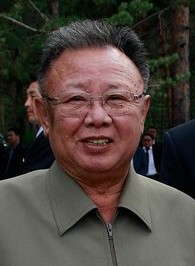 CHRISTIAN NEWS: SOURCE. Washington Times, by Jacquie Kubin. Monday, December 19, 2011. The news of the death of Kim Jong Il (B. 02-16-42/d. 12-17-11) leaves the Korean Peninsula and America’s relationship with North Korea unstable on the heels of the announcement that the U.S. and North Korea had struck a major deal to suspend the country’s nuclear program.

Associated Press has reported that North Korea has agreed to suspend their uranium enrichment program in exchange for a large donation of food aid to a country with a largely starving populace.

News of these talks has led to speculation that there could be a return to the table of the “six-party talks” – North Korea, South Korea, Russia, China, Japan, and the U.S.  Facilitating that return to negotiations would have been a bright mark on the Obama Administration’s foreign policy programs.

In exchange for over 240,000 tons of vitamins and “high-powered” protein biscuits from the U.S., North Korea would cease their nuclear program that led to the development of nuclear missles capable of reaching U.S. shores in 2009.

A holdover from the Cold War era, Kim Jong Il inherited power from his father, Kim Il Sung who died in 1994. Kim, groomed for more than twenty years to take over leadership of Communist North Korea, has pursued nuclear weapons, issuing repeated threats to South Korea as well as fears that the “Dear Leader,” as Kim Jong Il was known, might be a conduit of WMD to terrorist groups.

The Korean Peninsula has been in a “state of war” for the last fifty years following the cease-fire of the armed conflicts of the Cold War. Kim Il Sung fought against Japan, taking his place as a Communist leader following Japan’s WWII defeat.  Kim took position as President of North Korean while Syngman Rhee assumed leadership of South Korea.

Kim Il Sung created a dedicated following for both father and son, enrobing his rule in Stalinist ideology. The North invaded South Korea in 1950, killing millions of civilians and military personnel. The aftermath of that invasion was the uneasy cease-fire and the Demilitarized Zone that divides the Korean Peninsula, North from South, with a heavily fortified boundary.

Kim Jong Il showed early promise of maintaining his father’s ideology; South Korea claimed Kim Jong Il was responsible for the 1983 bombing, which killed 17 South Korean officials who were visiting what was then known as Burma and is now known as Miramar.

In 1987, 115 people aboard a Korean Air flight died, with a North Korean agent eventually confessing to planting the explosive device under Kim’s orders.

With the death of Kim Jong Il, his Swiss-educated son, Kim Jong-Un, was declared the country’s new leader, with state media making announcements shortly following the announcement of Kim’s death. While initial reports are that the North Korean people are rallying around Kim Jong-Un, it is not unheard of for military coups to take control when a dictator’s ruling fist is replaced.

President Obama must now closely monitor developments on the Korean Peninsula, even as he has been engaging the country in nuclear disarmament talks in exchange for food aid to the countries starving populace.

With the death of Kim Jong Il, there is great concern that South Korea may try to engage the young, not as experienced successor, Kim Jong-Un, in conflict. U.S. officials stress that the past behavior of North Korea has been erratic; it is difficult to make predictions, but one must be concerned whether the continued talks to reduce Nuclear power in exchange for humanitarian aid are at risk.

With the official mourning period set now through December 29, 2011, no immediate changes to policy or rule are anticipated.

However, with much of the country struggling from food shortages which has led to mass starvation, there can be some hope that the U.S. promise of humanitarian aid will persuade Kim Jong-Un to sit down at the table with the U.S. to create mutual terms that both countries can live with.

The now delayed announcement, previously scheduled for this week, will hopefully be a catalyst for the son to continue the father’s political direction. Unfortunately, North Korea’s government is extremely top heavy, with a populace that is extremely poor; Kim Jong Il maintained power over the people and military via overwhelming propaganda and a looming threat of violence, in which he was able to maintain control.

Kim Jong-Un does not engender the same levels of respect, or fear, that his father did and there is plenty of reason to be concerned that a military coup could be in the country’s future – and as the military is the dictator’s defensive line, loss of that support could mark the end of the Kim political dynasty.

The son of Kim Jong Il is young and untested