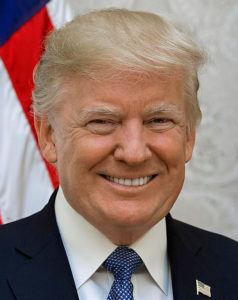 PRAY WITH US about Trump Blasts Religious Persecution. Father God, by Your sovereign will You gave us free will. You let Adam choose for or against You. Since then, we have seen the awful consequences of living without You. And the great blessings of choosing to live for You. Therefore, do not let the nations declare that choice illegal. Instead, preserve the freedom of choice that You have given to all men.

Expose the evils that fall upon a nation for persecuting those who make that choice. Deliver the persecuted from such evils. Furthermore, let all men know that Jesus is the only Way, the only Truth and only Eternal Life. And help them to choose against false religions, which lead to eternal destruction. Show us how to make the most of every opportunity to witness to them. For one day every knee will bow, and every tongue confess, that Jesus Christ is Lord. In Jesus’ name, amen.

Yesterday Donald Trump became the first US president to speak on religious freedom at the UN, calling “for the nations of the world to end religious persecution.” Specifically, he called on all nations “to stop the crimes against people of faith, to release prisoners of conscience, repeal laws restricting freedom of religion and speech, protect the vulnerable, the defenceless and the oppressed.”

Trump pointed out the alarming statistic that approximately “80% of the world’s population live in countries where religious liberty is threatened, restricted or even banned.” He could have also mentioned that about 80% of the persecuted religious believers worldwide are Christians.

Trump announced to the UN the formation of the International Religious Freedom Alliance, which will be “devoted to confronting religious persecution all around the world.”

BPN contends that a constitutional democracy ensuring religious freedom is essential for the gospel to spread and for the church to grow unhindered. People must have the freedom to hear the gospel and choose for or against Christ (Rom. 10:14). We must make the most of the time we have before the Antichrist rises to shut down religious freedom completely (Rev. 13:15-17).

DailyInsight. To be guaranteed reward for praying for your persecutors, then see them turn to Christ, is the best of both worlds (see Lk. 6:35).