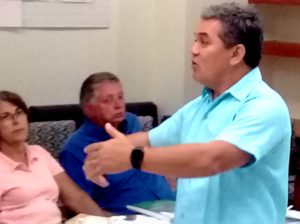 PRAYER ALERT on Belize-Guatemala border treaty. On March 12 church leaders met with Belize’s Ambassador to Guatemala Alexis Rosado at NEMO in Belmopan. We had long wanted to hear the “yes” side for going to the ICJ (International Court of Justice) to refute Guatemala’s land claim on Belize. Last August we heard the “no” side from the Belize PEACE Movement. PEACE warned that an ICJ ruling against us could force us to give up land titles and personal property. Also, they contended that allowing a foreign court to determine our borders would violate our Constitution. Because our Constitution defines our borders. Moreover, it requires a vote of two-thirds of our House of Representatives to change them. Overriding our Constitution would set a precedent for allowing other foreign decisions to rule us.

But Ambassador Rosado pointed out that Guatemala’s Constitution also claims rights to our land. After decades of fruitless talks and periodic military threats from Guatemala, they have finally agreed to go to the ICJ. Therefore we should settle the dispute legally before they change their minds. And before their rapidly escalating population and depleted land at our borders forces them to press their claims on our land.

Rosado emphasized that Belize has a far stronger legal case than Guatemala because we meet all the ICJ criteria.

Most important of all, the 1859 treaty was ratified by both the British and Guatemalan governments. As the number one criteria, such a treaty should prove decisive in Belize winning its case before the ICJ.

But I brought up the recent legal opinion by Stephen Vasciannie, the international law expert commissioned by the Belize Bar Association. He cited the weaknesses in Belize’s case:

2.      The colonial context of the 1859 treaty presents problems for Belize.

3.      The ICJ may rule that the UK or Belize owes Guatemala compensation for not building a cart road through Belize to the Atlantic, according to the treaty’s Article 7.

4.      The conflict’s 300+ year history may yet yield in a surprise document contrary to Belize’s case.

Why, I asked, is Guatemala suddenly so confident of its case as to want to go to the ICJ? Did someone find a surprise document that supports their case? Is that why current president Jimmy Morales made Guatemala’s claim on Belize such a major campaign issue in 2015?

Ambassador Rosado replied that if such a document existed, it would have surfaced by now. And that wouldn’t change the words of the treaty. They clearly delineate the border, according to the express purpose of the treaty. Moreover, Rosado said that the cart road is a separate issue that doesn’t affect the boundary lines.

Yet Vasciannie said, “The Belizean case may also face a particular challenge concerning Article 7 of the 1859 Treaty. The court could take the view that Article 7 cannot be ignored. It is or was a British commitment that was never fulfilled. Thus the Court may wish to find some way of giving effect to Article 7 if it is to uphold the Belizean boundary.” As a possible outcome, another legal opinion by a Judge Hudson “contemplated a compensatory payment on the part of the United Kingdom.” Rosado provided us with a book which gives much insight into this key article…

DailyInsight. God comes near in the moments we least expect. Then He breathes new life into our broken places. Paula Rinehart (see Gen. 16).

Guatemalan border view —no border at all.

Belize: The Controversy between Guatemala and Great Britain over the Territory of British Honduras in Central America. By William J. Bianchi.