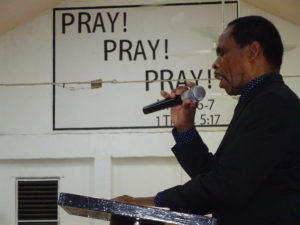 PRAYER ALERT on Christian Alternative Celebrations Parade. At Global Day of Prayer in June in Belize City, we launched our Raising Standards in Belize campaign. We prayed in groups and corporate prayer led by pastors concerning the seven areas in which Belize must raise standards. They include abortion, traditional marriage & family, the LGBT agenda, drug use, corruption, Belizean sovereignty vs. Guatemalan claims, and the curriculum which is training our children for the future.

Our future depends on what we pray now. But we were alarmed at the relatively low turnout. Clearly we need to strengthen relationships with the absent members of the Body of Christ. On the night after the Global Day of Prayer, the local chapter of NEAB met. A young minister, Kevin Forrester proposed we hold a National Day of Prayer to rally the troops to focus on raising the standards before they fall further. I suggested we do it during the September Celebrations. While the rest of Belize is celebrating the carnal side of Belize in parades and drunken partying, we can celebrate what God has done, is doing, and will do in this nation.

More chimed in. We could not only pray, but have a Christian parade. We could literally raise standards and banners proclaiming God’s good plans for children, youth, schools, courtship, marriage, unborn babies, families, addiction to Jesus vs addiction to drugs, political integrity vs corruption, and national sovereignty vs foreign influence.

Our parade would end in a large public place with worship, dance, prayer, testimonies and exhortations to keep exalting Christ and keep raising our standards higher and higher. And for His body to keep moving together so we can take ground for the future.

We’re calling it the ICJ Independence Day March. ICJ stands not for International Court of Justice—where Guatemala will take its claims—but for In Christ Jesus. In Him and by His grace we will stay independent of Guatemala and every other foreign influence.

From our invitation to the churches: “Now it is time for Belize, in the midst of all the corruption and violence, to do the same. Belize for Jesus!

“Let’s gather as one Body of Christ, celebrating our country’s 38th year of independence—knowing fully well that true freedom only comes through Christ and His finished work.”

Father God, we proclaim You as Father of this nation. You provided a Constitution which is “founded on principles which acknowledge the supremacy of God.” It says our “freedom is founded upon respect for moral and spiritual values.” Thank You that we live in such a country. But we confess we have failed to uphold Your supremacy. We have failed to uphold the moral and spiritual values that we know from Your word. We confess we have let Your standards fall. And now the enemy has come at us stronger and stronger, to take Your place.

But You say, “When the enemy comes in like a flood, the Spirit of the Lord will lift up a standard against him” (Isa 59:19). So we invite not only churches, but Your Spirit to come to this march. Forgive us and fill us with Your power and holiness. Raise Your standards in us and through us. For when we do this with You, the enemy may come in like a flood, but we will drive Him back. As we walk in unity, before and during and after this march, walk with us and we will take more ground for You.

Time to pray and plan for Christian Alternative Celebrations Parade