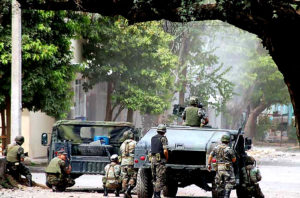 Specifically, he promoted his “Hugs Not Bullets” policy. It would strengthen communities by alleviating poverty. In that way stronger communities would mean weaker cartels and thus less violence.

Instead, Mexico’s homicide rate has risen 2% during his term. At this rate, Mexico will set a new record of 35,000 homicides this year. They have included killings of Christian leaders who have spoken against them.

The cartels are acting bolder than ever. In October, when army antidrug forces captured drug kingpin El Chapo’s son Ovidio Guzman Lopez, they had to give him up amid an overpowering counterattack by the Sinaloa cartel, which killed eight.

In November, nine resident Americans—three women and six children—died in an ambush amid a turf war between cartels. And earlier this month, a convoy of CDN cartel trucks staged a military-style attack on Villa Union City Hall and other government offices, causing a death toll of 21.

All three notorious incidents happened near the US border. President Trump offered to send in US troops to “wage war” against drug cartels.

But AMLO declined, citing the war on cartels conducted by previous presidents. “That was a failure,” he said.  “It caused more violence.” He later added, “Violence cannot be confronted with violence… The bad needs to be confronted doing the good.”

However, a recent El Universal editorial objected. “Conciliatory messages and calls to criminals do not seem to be enough… They do not seem to fear the force of the State.”

Pray for God to:

1.    Bring the fear of God on drug cartels which do not fear the Mexican army. Overpower them with the Spirit of repentance. For those who do not repent, bring them to justice.

2.    Break the grip of the cartels on the communities and regions they now dominate. Raise up faithful Christian leaders to help build relationships which will strengthen them. For “unless the Lord guards the city, the watchman keeps awake in vain” (Ps 127:1).

3.    Show Mexico and the US how to cooperate against the cartels to enforce laws that protect people. Release great waves of the Holy Spirit over both countries. Do so in a way that reduces the dependence on drugs and increases dependence on God’

DailyInsight. Government force is only meant to prevent one person or group from harming other persons or groups (see Rom. 13:4).

Related sources for hugs not guns:

Mexico’s Lopez Obrador doubles down on ‘hugs, not bullets’ policy amid mounting criticism