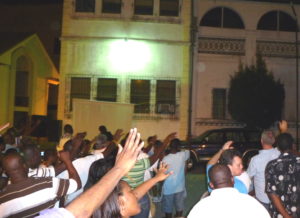 PRAY WITH US about LGBT activist Supreme Court picks: Father God, You are King of kings and Judge of judges. And You will have the last judgment. Give us grace to learn the fear of the Lord and of Your judgments. That is the beginning of wisdom. Especially give this grace and wisdom to our leaders, and the leaders of all nations. Why do they rage against You, and against Your anointed Son and anointed people? And against your good design for us, male and female, that we may be fruitful and multiply and glorify You?

Why do they take counsel together against Your good counsel? Only You know. But You also know how to turn them back again. So we pray that they may come to their senses. And that they may escape the trap of the devil, who has taken them captive to do his will. Free them from these deceptions. Then Your people will remain free to speak more truth to Belize and to the nations. For Your truth will set them free. In Jesus’ name, amen.

Belize PM Dean Barrow is proceeding to appoint two LGBT activist lawyers to the Supreme Court. Lisa Shoman and Westmin James are two chief lawyers for UNIBAM, which legalized sodomy in Belize. UNIBAM is the pro-LGBT United Belize Advocacy Movement which took that case to court. In a 2018 Facebook post, Shoman even called herself “a proud member of the ‘UNIBAM CREW’”.

This would compromise her impartiality as a Justice. And that of Westmin James as well. Though the vast majority of Belizeans oppose the LGBT agenda, a small minority want to take more LGBT cases to court. Both Shoman and James would have to recuse themselves from considering such cases.

The Supreme Court already has a pro-LGBT Justice in Antoinette Moore. Powerful business interests are pushing a potential fourth LGBT advocate to become Chief Justice! What happened to the independence of the judiciary?

Currently Belize has an acting Chief Justice in Michele Arana. She has an impeccable record of fourteen years of legal experience. But she has not been properly appointed. Will the PM force Arana to step down and make the Supreme Court predominantly pro-LGBT?

The Belize Constitution says that Supreme Court Justices shall serve until age 62. But the PM is appointing Shoman and James to serve only one year each. Does that give Shoman and James just enough time to approve the far-reaching LGBT agenda in Equal Opportunity Bill?

That bill too is extensively unconstitutional. It can deny the accused his right to presumption of innocence, to a lawyer, even to a hearing. But once politicians start ignoring their constitution, they will keep trying to operate outside the law they have sworn to uphold.

Lisa Shoman to be Appointed Judge of the Supreme Court