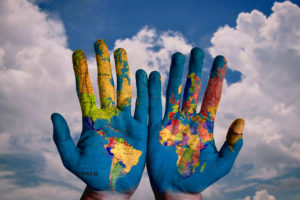 PRAY WITH US about Democracy Declines, Authoritarianism Rises. Father God, we exalt You as Father of fathers, King of kings and Lord of lords. We thank You for fathers in the faith who established the rights You gave us. We thank You for equal rights to life, liberty and the pursuit of happiness. And we thank You for freedom of speech, of the press, and of religion. Even for the freedom to disbelieve You. For only then can we find far greater freedom in believing You.

As the end times draw near, the difference in choosing for You and against You will grow greater. Show the world that You alone deserve to be King. That You alone deserve to be our Lord God. Keep us on this firm foundation of faith as You shake this earth that You created. And shake the peoples loose from false kings and lords, so they can find You. In Jesus’ name, amen.

If the Antichrist were to arise today and declare himself god, the world would reject him, thank God. But one day the whole world will follow the Antichrist and worship him as god (Rev. 13:3-8)..

What must happen between now and then to allow the Antichrist to arise and take over? Unfortunately, during that short time we will see 500 years of progress in democracy come undone.

For 500 years, ever since the Reformation, democracy was rising, century after century. It began in the 16th century, when Martin Luther, a Christian theologian, declared “Lex Rex.”

Lex Rex means that the law should be king, not a man. No man should live above the law. This was a new concept in those times, when kings were treated as gods, with divine rights.

In the 17th century, another Christian theologian, John Locke, declared all men equal because all men came from the same Creator. He declared that God gave all men rights to life, liberty, and personal property.

And the nation of England adopted some of those rights in the first Bill of Rights. But it only gave members of Parliament the right to freedom of speech & free elections.

In the 18th century, a group of 55 men, 52 of whom were Christian leaders, started a new nation. It gave all those rights to all men. They declared “that all men are created equal, that they are endowed by their Creator with certain unalienable rights, that among these are Life, Liberty, and the Pursuit of Happiness…”

They wrote the US Constitution which became a model for the constitutions of many nations since then.

The rise of constitutional democracies

Not many of those nations have had really good records of human rights, not even the US. But most of them had really good constitutions with some form of democracy. And they gained more legal rights than ever before in their histories.

We can say that Christian theologians and Christian leaders gave the world freedoms and rights that the world never had before. And now the world in general wants to keep those rights. But it wants to take those rights away from Christians.

The decline of constitutional democracy

But, as constitutional democracy declines, authoritarianism is rising. At this time more than 57% of people worldwide are dissatisfied with democracy. That compares with only 33% in 1995, according to a Cambridge University survey.

The survey said the main reason for the discontent was political polarization. In many nations the Left has moved so far from the Right as to leave irreconcilable differences.

Democracy can work when the opposing parties have enough common ground to work on. But a divided nation cannot stand. Each newly elected government will try to undo what the previous government did.

As a result, the whole nation will rock back and forth. Each election will have the potential of becoming a revolution. Then the losing side will try to make it impossible for the winning side to govern at all.

We see in the US many Democrats spending more time trying to undo the 2016 election than they spend on any other issue.

But when God shakes the nations, like He is doing with the Coronavirus crisis, some find that they do have more common ground than they thought. They want the economy to survive.

More shakings will come, with increasing intensity and frequency, to further widen these divisions. And more people will be shaken from their jobs & their homes & their plans for their lives

Some will turn to God. As a result, we will see great harvests of souls for Christ. But others will turn to the state.

But nations will fight over that power over the people. Nation will rise against nation, and kingdom against kingdom.

And who will win? Eventually, the Antichrist—for a few years—his time is short. The devil will give so much supernatural power and authority to the Antichrist, that the whole world will be astonished and follow him. They will say, “who can make war against him?” (Rev. 13:2-4)

Until then, we must pray and prepare for great harvests of souls. For multitudes who do not turn to the state will turn to Christ instead.